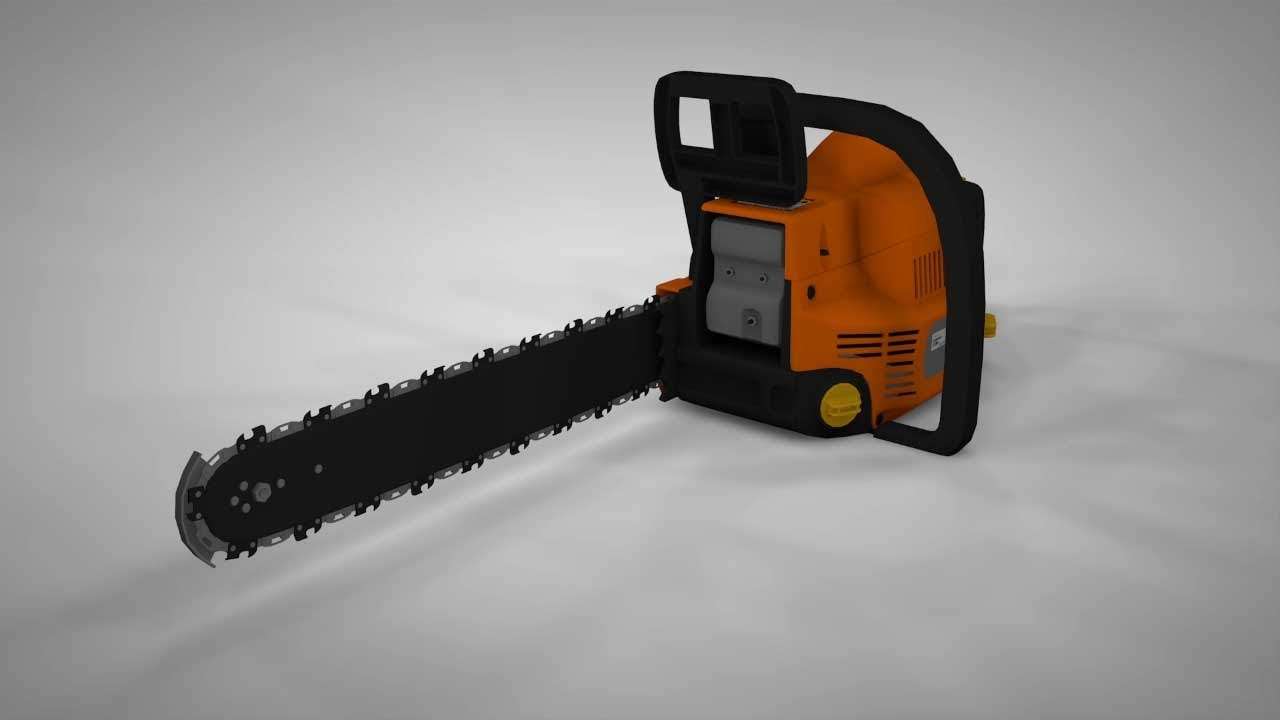 So, you’re asking how does a chainsaw work?

Sure, you already know that it’s used for lumber work, but what are the components and how do they work together?

That’s what you’re about to find out.

In essence, a chainsaw spins a chain of saw blades (also called “teeth”) around a guide bar to cut through the target material in a fast, smooth motion. In most cases it’s wood, but some chainsaws can cut through steel, iron, or even concrete.

The sizes of blades and guide bars can vary between chainsaws. The shortest guide bar is 6 inches (15 cm), while the longest is 72 inches (183 cm).

Gas chainsaws are the most common out of the three. They include a fuel tank, which feeds into a carburetor to mix with the air before passing into a cylinder where the gas ignites to release the energy. That energy is then used to push a piston back and forth which causes the chain to turn in a circular motion.

Battery chainsaws are the newest technology-wise. They receive energy from a lithium-ion battery. They’re usually less powerful than gas chainsaws, but the most portable out of the three.

You may not know this, but the very first chainsaw (for cutting wood) was electric. A plugged power cord powers an electric chainsaw. This leads us to their biggest con – being the least portable due to the power cord.

Chainsaws also vary in size and the power they can produce.

The largest and most powerful chainsaws can cut down large trees. The simplest chainsaws are ideal for trimming shrubs in the garden.

Parts of a chainsaw

The main components inside of a chainsaw include:

In that order, these main parts work together to power and operate a chainsaw.

Most chainsaws start by the press of a button or pull of a cord, depending on the type of power used. The motor receives the energy from this starting mechanism and powers the crankshaft. Like a bicycle chain, gears rotate the saw chain. The power of the crankshaft turns these wheels.

As the sprockets turn, the chain rotates around the guide bar, creating enough friction to cut the wood. All modern chainsaws have a chain brake that stops the chain from turning in the event of kickback. Kickback is the sudden pulling of the saw blade back towards the operator when the tip of the chain touches a hard object.

Each chainsaw is set to use a certain amount of power depending on the work it’s designed to do. The throttle and clutch are also used to regulate the engine’s energy.

The throttle inside the engine controls the amount of energy, either gas or electric, that gets into the engine.

In doing so, the throttle is able to control the chain speed per minute. The more energy that’s released, the faster the chain turns.

Most chainsaws allow the operator to use the throttle to adjust the speed according to the needs of the project.

The motor also includes a clutch that uses suction to prevent the motor from seizing up if the chain hits more difficult material. The clutch can also stop the chain from turning while keeping the motor running to prevent mistakes or injury.

Chainsaws can stop working if they aren’t maintained.

Maintenance varies depending on the type of chainsaw and how often it’s used.

For the sake of safety, it’s important to perform a basic check before use. This includes:

Also, the sharpness of chain blades dulls with age and use. Dull blades are dangerous because they cause the chainsaw to bounce off the wood instead of cutting through it.

Read the instruction manual for your particular chainsaw to ensure its successful use.

Chainsaws can be a great tool that saves time and energy in all wood cutting tasks.

The most common uses for these machines are:

Now that you know how a chainsaw works, you can better appreciate the way these tools cut wood.