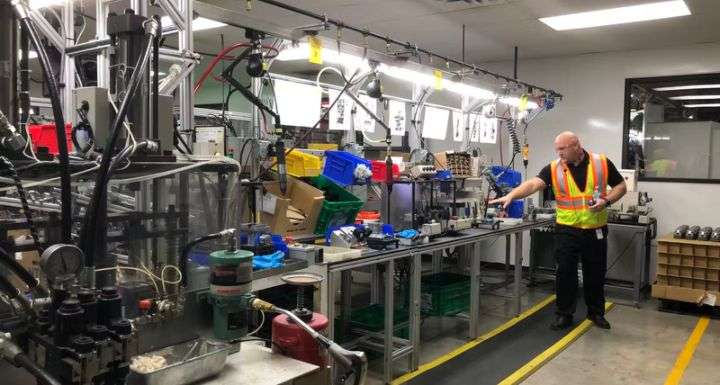 If you have heard anything about chainsaws, you have probably heard of Stihl and Husqvarna, who are the market leaders.

ECHO is not as well known as those two, but quality-wise, it’s up there.

And you’re wondering where it’s made.

You may be asking…

Is ECHO a Chinese company?

No. Although ECHO is an Asian brand, they’re Japanese, not Chinese.

ECHO Inc. is owned by the Yamabiko Corporation. It’s a well-established company operating for more than 4 decades.

The company was originally called the Kioritz Corporation but shifted to the ECHO brand name in 1978. This was not long after they first started manufacturing chainsaws.

Here is a great infographic from Echo’s history page. You can see they have been involved in chainsaw manufacturing since the late 1970s. Their chainsaws have had that distinct orange color since the beginning.

Where are Echo chainsaws made?

ECHO’s main product line are gas chainsaws, but there are also battery chainsaws as well as a range of other outdoor power equipment like blowers, brush cutters, and hedge trimmers.

ECHO chainsaws are manufactured and assembled in Japan, China, and the USA.

It can depend on where in the world you are buying your chainsaw as to where it has been made. If you are buying an Echo chainsaw in the USA, it was most likely made in America (or at least assembled there).

If you are buying an ECHO chainsaw in Australia or New Zealand, it was most likely made in Japan or China.

Echo has manufacturing and assembly plants in Yokosuka and Morioka, Japan, with the head office in Tokyo. Their Chinese plant is in the manufacturing hub of Shenzen.

Their US operations are at Lake Zurich in Illinois, where they employ well over 800 staff.

It’s a similar story as to where Husqvarna chainsaws are made, or to who makes Stihl chainsaws.

You already know by now. ECHO.

Unlike other, lower-tier brands, they don’t outsource manufacturing. They control the entire process from design to complete assembly. That goes for their entire lineup.

They manufacture trustworthy and reliable products that are well-priced and great for homeowners, homesteaders, and farmers alike.

Is ECHO a Home Depot brand?

Are Husqvarna and ECHO the same?

No. They are both different companies Husqvarna is Swedish and ECHO is Japanese.

Are Shindaiwa and ECHO the same?

No. While both are owned by Yamabiko Corporation, they are separate brands.

Is ECHO made in the USA?

While the headquarters are in Japan, over 200 Echo products are manufactured in Lake Zurich, Illinois, and distributed globally.

1 thought on “Where is ECHO Made?”