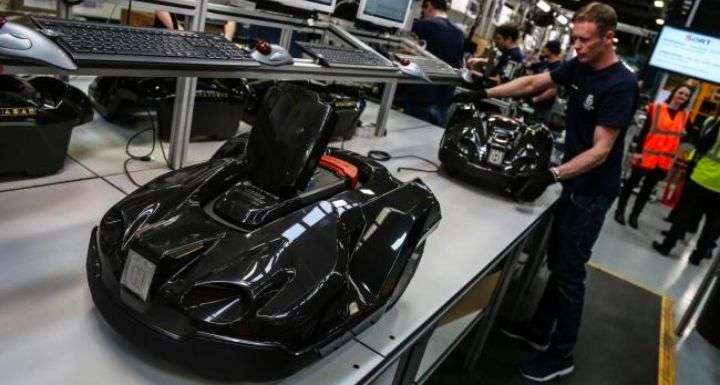 So you, like many other people, want to know more about the manufacturing of Husqvarna products.

I will keep this article to the point, so if you want to read about Husqvarna’s history, find another article.

Just a quick introduction for those who may be unfamiliar with the brand.

Husqvarna is a Swedish company. In fact, it’s one of the oldest companies in the world dating back to 1689.

Husky is a premier power equipment brand and is renowned for producing some of the best chainsaws.

The Husqvarna Group is a publicly traded company, which means they have multiple owners. The biggest shareholders are Investor AB (16.8%) and Lundbergs AB (7.5%).

Where is Husqvarna brand made?

​​​​I think it’s not too surprising that the greatest production value is in the US, which remains the largest consumer market in the world.

More than a half of Husqvarna’s global production value is centered in the US (54%).

What is surprising though, is that only 40% of their global sales are actually in the US. Which probably means, the rest is being sold in Canada and Mexico, possibly the rest of the Americas. But US-made Husqvarna products and components are probably shipped globally.

Where are Husqvarna chainsaws made?

So who makes Husqvarna chainsaws? You already know that Husqvarna is Swedish. That means they’re made in Sweden, right? Not quite. In a globalized economy, it’s becoming almost impossible to tell where exactly the products come from unless the brand shares the information with the public. If they don’t, then even if you find a product with a tag that says “made in Sweden”, it just means that it’s been assembled there. The parts may as well come from China.

Is that the case with Husky?

Well, kinda. With Sweden being one of the highest cost of living countries in Europe, you can bet Husqvarna tries to save on the costs and maximize their profits. Which doesn’t necessarily have to lower the quality, to be honest.

These days, their products are being made in several countries:

It’s most likely that any Husqvarna product is made up of components sourced from more than one of these countries.

There’s a pattern though. While their low-end products are usually made in China, as the products increase in price, their manufacturing usually moves to a higher cost of living area.

Is Husqvarna made in the USA?

Yes, the brand also has a large manufacturing location in Nashville, Arkansas. It is an 874,00 square foot facility that includes manufacturing for chainsaws, trimmers, and many other products. It also serves as a warehousing and storage center.

The US site is also powered by a solar power plant – so for those of you who like that box ticked, there you go.

Is Husqvarna made in China?

Yes, they also have manufacturing plants in China. Especially the lower-end products are manufactured there.

This is a bit of a weird question. No country owns Husqvarna. It used to be a state-owned company way back in the day, but nowadays it’s a publicly-traded company with multiple owners.

Is Husqvarna the same as McCulloch?

No. They are both subsidiaries of Husqvarna Group, but they’re separate brands.

Kind of. Although Stanley Black & Decker owns Craftsman, they outsource the production to other manufacturers. One of them being Husqvarna.